Dark times may be easing and brighter months could be ahead, if a one-month decline in new Covid cases and deaths continues in Michigan.

To be clear: Each category still rises steadily day-by-day and the pandemic remains a serious public health risk affecting 587,581 people since March and killing 15,522 in 11 months. (More than 541,200 of patients with nonfatal infections, 92%, are classified as recovered.) 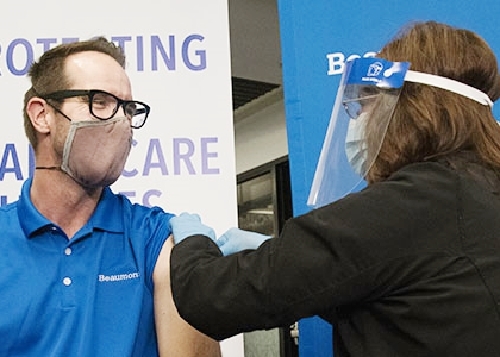 But the rate of increase -- new cases and deaths as a share of the cumulative total -- slowed meaningfully this month after a January rise attributed partly to winter holiday travel and socializing. Another factor is the increasing number of partly and fully vaccinated people.

"Michigan is doing well compared to a lot of other places in U.S.," Dr. Joineigh Khaldun, the state's chief medical executyive, tweeted recently. "But the virus is still quite prevalent and we know the B117 variant is here."

Here's data from the past three months:

One month's slower rates of increase are not necessarily the start of a trend, naturally. But day-by-day data since Jan. 1 also has other encouraging figures:

In Lansing, Dr. Khaldun of state government tweets this weekend: "The authorization of a third vaccine [from Johnson & Johnson] is a big deal. All three are safe and effective and will help us end this pandemic. We will have these in Michigan this coming week."

Michigan's vaccination rollout has reached 1,357,642 people with first doses, as of Friday. Nearly 775,000x of them are fully protected with second shots.

► Support our reporting by becoming a Deadline Detroit member for as little as $3 per month.

Rep. Debbie Dingell describes 'hate and death threats every week' at work and her Dearborn home

Craig hits back at Tlaib for call to abolish police: 'Who does (she) represent?'

Detroit chief on Minnesota police shooting: 'How do you confuse' a taser with a gun?