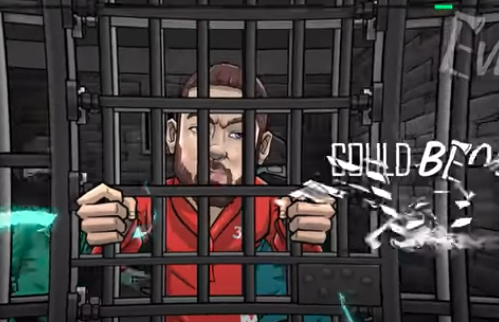 Eminem's latest, an animated video titled "Tone Deaf," flips the bird to a recent TikTok campaign to "cancel" his career because of misogynistic lyrics.

The song also declares that, "You think getting rid of me's a piece of cake? / I'm harder than finding Harvey Weinstein a date."

To show his defiance, he also mentions the C-word. He goes on to mention his hometown pizza, Little Caesars:

I'd need to be a motherfuckin' pizzeria, but you ain't gettin' no cheese from me
I went from Lil' Ceasers, BLT-ses, grilled cheeses
Bein' dirt poor to filthy rich, I'm still me, bitch.
(Full lyrics below)

Tone Deaf
Yeah, I'm sorry (huh?)
What did you say?
Oh, I can't hear you
I have an ear infucktion and I cunt finger it out (out, haha)
(I need Auto-Tune)
Yeah
It's my alter-ego's fault, these evil thoughts can be so dark
Cerebral palsy, three Zolofts
I eat those off to Rico Suave, look it up
Cadillac with a ladder rack in the back, with a cracked axel
A backpack full of Paxil
A black satchel, a nap sack and a flask full of 'gnac and Jack Daniels
Girl, let's go back, back to my castle (yeah)
I don't wanna hassle you, Alexandra
But my dick's an acronym 'cause it stands for you (oh)
You, wait, Alexandra who? (Damn)
All I know is Friday, I met you (what?)
Saturday, I'll probably forget you

Guess that's what the Molly and X do (What the fuck?)
'Cause who the fuck am I laying next to? (Eh)
But ever since D-Nice "To tha Rescue"
Feel a fresh crew (uh), been a lab rat (yeah)
From a test tube (uh), I'm goin' in like the red roof (Red Roof Inn)
You don't like it, eat a cock 'til your jaw breaks
Call it caught between a rock and a hard place
Like a sasquatch in a crawlspace
'Cause you're watching your heart race like you're Scarface
In a car chase with the cops or an arcade
Stuck inside of a Mario Kart race, stuck in saw blades
At a stop and a start pace
What I'm tryin' to say is, I'm drivin' 'em all crazy
I can't understand a word you say (I'm tone deaf)
I think this way I prefer to stay (I'm tone deaf)
I won't stop even when my hair turns grey (I'm tone deaf)
'Cause they won't stop until they cancel me (yeah, yeah)
I see the rap game then attack the verses (uh)
Turn into a graveyard packed with hearses (yeah)
Just like your funeral, I'm at your service (what?)
Pockets on stuffed like a taxidermist (woo)

Just landed in Los Angeles when this chick Angela and her grandmother in a tan
Colored van pulled up with a hand full of Xans
And a substantial amount of ganja, just to ask what my
Plans for the night are (yeah)
I said sneakin' to the Sleep Inn for the weekend and pretend it's a five star
Yeah, or leap into the deep end of the pool, I can show you where the dives are
We don't even gotta drive far
I know this spot that is so live, but I'm tryna get some head first, like a nose dive (haha)
So many side chicks, can't decide which to slide with and which should I ditch
So when it comes to ass, bitch, I get behind like the Heimlich (yeah)
Had one chick who liked to flip sometimes on some switchin' sides shit
Pushed her out the side, kicked, then I flipped
The lil' white bitch off like a light switch (bitch)
It's okay not to like my shit
Everything's fine, drink your wine, bitch
And get offline, quit whinin', this is just a rhyme, bitch
But ask me, will I stick to my guns like adhesive tape?
Does Bill Cosby sedate once he treats the cheesecake and the decent steak?
You think gettin' rid of me's a piece of cake?
I'm harder than findin' Harvey Weinstein a date (Haha)
And that's why they say I got more lines than Black Friday
So save that shit for the damn library (shh)
You heard of Kris Kristofferson? (Yeah) Well, I am piss piss off'ed-eson (oh)
Paul's askin' for Christmas off again
I said, "No, " then I spit this song for him, it goes
I can't understand a word you say (I'm tone deaf)
I think this way I prefer to stay (I'm tone deaf)
I won't stop even when my hair turns grey (I'm tone deaf)
'Cause they won't stop until they cancel me (yeah, yeah, yeah)
Bitch, I can make an orange rhyme with banana, oranana

Eating pork rinds, sword fightin' in pajamas
At the crib, playin' Fortnite with your grandma
But I'm more like I'm 4'5" with the grammar
Bitch, 'bout to show you why your five favorite rappers, can't touch this
But before I get the hammer, I should warn you I'm Thor-like in this manner
But the day I lose sleep over you critiquin' me or
I ever let you cocksuckers eat at me
I'd need to be a motherfuckin' pizzeria, but you ain't gettin' no cheese from me
I went from Lil' Ceasers, BLT-ses, grilled cheeses
Bein' dirt poor to filthy rich, I'm still me, bitch
Like a realtor, it's realty, bitch (real talk)
Aftermath, bitch, whole camp's lit
We put out fire, Dre stamps it
With my cohorts, hit up Bogart
Yeah, got your whole squad yellin', "Oh, God"
Here comes Marshall, with no holds barred
Bitch, I'm a hurricane, you're a blow hard
Like your old broad, she full of semen, like the coast guard

And life's been pretty good to me so far, for the most part
Had a couple of run-in's with popo, caught
A couple assault charges, got a few priors like crowbars
Which is so odd 'cause I'm forty-eight now
That 5-0's startin' to creep up on me like a patrol car
I'll be an old fart, but you don't want no part, so bitch, don't start
Simmer down, compose yourself, Mozart
I ain't went nowhere, call me coleslaw
'Cause I'm out for the cabbage and I'm so raw
And if time is money, you have no clocks
And any folk caught within close proximity's gettin' Colt cocked
My enemies I'm a chimney give me the smoke, opps
And R.I.P. to King Von, and it don't stop, and I know not
What the fuck you say? I told y'all, it ain't me, it's my alter-ego's fault
But if y'all wanna cancel me, no prob'
I'll tell you the same thing I told Paul
I can't understand a word you say (I'm tone deaf)
I think this way I prefer to stay (I'm tone deaf)
I won't stop even when my hair turns grey (I'm tone deaf)
'Cause they won't stop until they cancel me (I'm tone deaf)